PC2Darkyand others on Carlos and Friends Characters

Black (like liney eyes)
Livid Stickman is a Stcikman created by Carlos Cartagena, his date when he was created was 11/17/20

Likes: being calm, wanted people to count up to 10, people counting to 10.

Dislikes: something going wrong, bad behavior people, people that are bullies, bad people, people doing something that would be bad he sees, annoying songs Carlos doesn't like, people counting to more than 10(mostly 12).

everytime he gets livid, his face started to look more redder than ever and grow more symbols that make you get furious.

Proprotions: he's a red stickman with dark red outline, a green hat, brown hair and a symbol that make you get furious(more than one symbol on his face makes him even livider and livider).

someone wanted him to smile, as a little stange smile he makes.

he's not scared of nothing, he can't get in trouble, he's not a villian, he's not a troublemaker, he's just one stickman with a livid face. 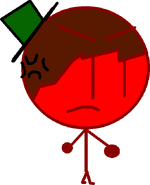 a sprite of Livid Stickman

Hating PPG Villians (NOTE: he doesn't grow more of the symbol on his face

Add a photo to this gallery
Retrieved from "https://carlos-cartagena.fandom.com/wiki/Livid_Stickman?oldid=265"
Community content is available under CC-BY-SA unless otherwise noted.